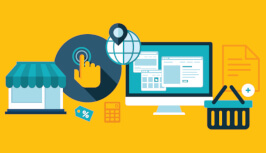 The very first PostNord/Direct Link report “E-commerce in Europe” was published in 2014. Since then, the entire concept of online shopping has developed at a remarkable speed. Here are the first four of eight trends that have emerged during this period (the remaining four trends will be published in a post in January).

Cross-border e-commerce is increasing every year. In 2014, 4 out of 10 online consumers stated that they had shopped from abroad. In this year’s report, the figure is 7.5 out of 10. E-commerce from China has grown the most, driven primarily by low prices. Online shopping from the UK and Germany has also increased, but here consumers are driven more by strong brands and unique products.

Marketplaces were not part of the report back in 2014 because they were not really a phenomenon here in the Nordic countries at the time. However, in recent years they have become ever more important. One advantage is that most products can be found in a single place. Yet at the same time, some marketplaces are emerging that only sell certain kinds of goods. For example, Zalando has developed into a marketplace dedicated only to fashion.

Clothing and footwear, home electronics, and books have been the most popular product categories to purchase online ever since the report was first published in 2014. However, a few newcomers have arrived that are believed to grow continuously in the future, including home furnishings, and products in the beauty and health segment.

Returns are on the rise

The return rate was not measured when the first report was published, but in the next year, 2015, 24 percent of shoppers made a return. In 2019, the corresponding figure was 43 percent. One reason for this development is that online stores have improved their return processes and the way they explain the terms and conditions that apply. As a result, consumers feel more confident that everything will work smoothly and they dare to order more products and then return what they don’t want to keep.

Interested in the latest report from 2019? The “E-commerce in Europe” report can be ordered free of charge.