With a huge consumer market eager to purchase international goods and services, Brazil is drawing the attention of savvy brands all over the world. About three-quarters of Brazil’s 140 million internet users have purchased on international websites at least once.

As the largest economy in Latin America, Brazil represents about 42 % of all B2C e-commerce in Latin America, and e-commerce sales there have increased 38 % from 2014 through 2017. With 130 million active Facebook users, Brazil is ranked number three worldwide. There’s good reason that e-commerce giants including Alibaba, Amazon, Walmart, and Wish are investing significantly in this market. Merchants in Brazil need to charge their customers more because of high taxation costs imposed on them. It’s cheaper for Brazilian consumers to buy from international websites than to buy domestically-sold goods. 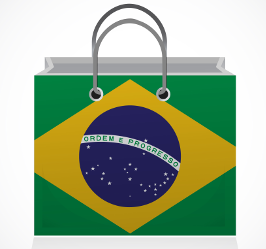 Cross-border e-commerce merchants selling to Brazilians collectively experienced the highest sales volume in November 2017. Brazilian consumers made 33 % of their annual cross-border online purchases during September, October and November. In fact, Singles Day e-commerce sales were 177 % larger than Black Friday in 2017 in terms of sales volume generated by e-commerce merchants selling to Brazilians. Global e-commerce sales in November are heavily fueled by Brazilian employees receiving a thirteenth salary. This additional income is required by law and is usually received in two installments at the start of November and in December.

While Brazil could be a cash cow for global e-commerce sellers, it also comes with red tape. Localizing in Brazil means lots of planning, calculation and understanding the whole environment before you come in. Delivery service companies face challenges in the Brazilian market, says the International Trade Administration. This is due to numerous barriers, including high import taxes, an automated express delivery clearance system that is only partially functional, and a lack of a de minimis exemption from tariffs for express delivery shipments. Brazil’s 50 USD de minimis exemption applies only to postal service shipments to individuals. There is an exemption for gifts sent via postal delivery, which merchants try to circumvent by making an order appear to be a gift. But those shipments can be stopped in customs when they see a commercial invoice.

But on the bright side, Brazilian e-commerce customers have been taught to wait for products from China for 30–60 days or more and have not been caught up in fads such as same-day delivery. Also, Brazilian consumers use national payment methods for about 90 % of their online purchases. Brazil’s online payments market is restricted by law, dominated by a few local banks, and has its own standards. Therefore, before going all-in on Brazil, it is suggested that you work with an in-country online payment processor, or a payment processor that works with these few Brazilian banks.