In recent years, new socio-demographic groups have begun to shop online. The largest increase has occurred among the elderly. One reason is that digitally mature groups are aging, another is that those who already are 65+ are fast getting used to shopping online. 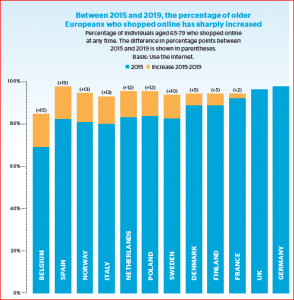 Older people also benefit from the increase in ways to access the Internet compared with previously – those who have difficulty using a computer can use a mobile phone or tablet instead. And it will be even easier in the near future. Voice recognition tools such as Alexa and Google Home have already been shown to be capable to of helping elderly people in everyday life, since they require less technical know-how. Voice recognition is expected to be particularly valuable for older people with physical disabilities.

Image and information above taken from the latest ”E-commerce in Europe” report.