The digitization race in Europe is on 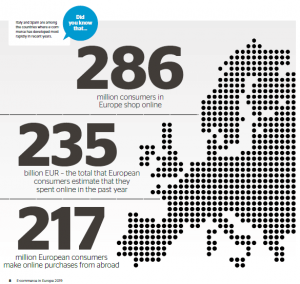 The pace of digitization in Europe the last few years has been quite staggering. Eurostat statistics show growth in essentially all areas, from video streaming and social media to banking and – naturally – e-commerce. Within four years, 45 million new e-consumers have been added in the twelve countries surveyed by the PostNord/Direct Link report “E-commerce in Europe”, and today the total number is 286 million online shoppers.

And it is certainly not only domestic e-commerce that has grown. The number of consumers that make online purchases from abroad has exploded in Europe over the past four years, from 159 to 217 million people – an increase of 58 million.

Considering the EU initiatives to achieve a common European e-commerce market and to eliminate obstacles to trade, it is likely that this growth will continue and that borders between countries within the European Union will have declining significance for e-commerce.

Total e-commerce in the surveyed countries is EUR 235 billion annually. Germany is still the largest market closely followed by the UK. However, the southern European markets have seen strong growth the last few years and are now taking an ever-increasing share of the total e-commerce cake.

The new 2019 report can be ordered free of charge.